How adorable is 1931's vulpine singing brakeman?! It sure made me smile; I hope it brings you lotsa cheer as well!
And for good measure, here's my favorite Felix cartoon from when I was a young 'un:
(I was quite taken with the li'l kittens' "song" there when I was a kiddy; I could belt out a mean rendition of it myself, performed along with the accompanying dance, haha!)
♥
Have a very merry Hallowe'en, y'all! What are you going to be?!


These cartoons have made me wish I'd had the time to sew up one of these: 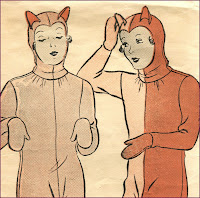 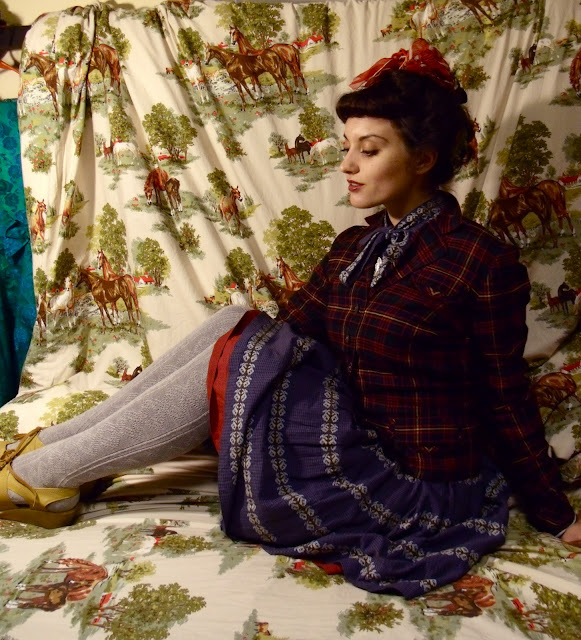 Just a little outfit post. Everything is '40s or '50s except for my grey socks and my magical mustard Remix shoes. The little tartan 1940s jacket is one of my favorite things in my closet; I bought it for $5 in high school, can you believe it? And it's still going strong. Now that it's officially chilly up here in the Great North Woods, I've been having a grand old time with layers and pattern-mixing galore, as you can see. Even my chiffon headscarf sports a jaunty rainbow zebra motif. I also applied this aesthetic to the ol' blog here: note the new autumnal-hued wallpaper!

Speaking of patterns, my duvet cover makes a nifty backdrop, eh? It's almost like I took these pictures in beautiful Kentucky horse country.
READ MORE »
by Dakota at 8:00 AM 19 comments: 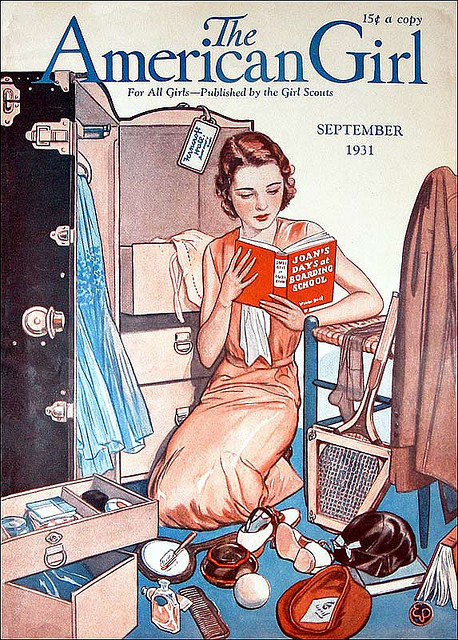 Here are some more beautiful New England college girls of the '30s, '40s, and '50s! I've been taking most of my style cues from these gals lately; I love how practical and easy-to-wear these little ensembles are, while still retaining plenty of vintage charm. I imagine once I've graduated and have a "real" job these kinds of outfits would look smart in the professional world, as well. 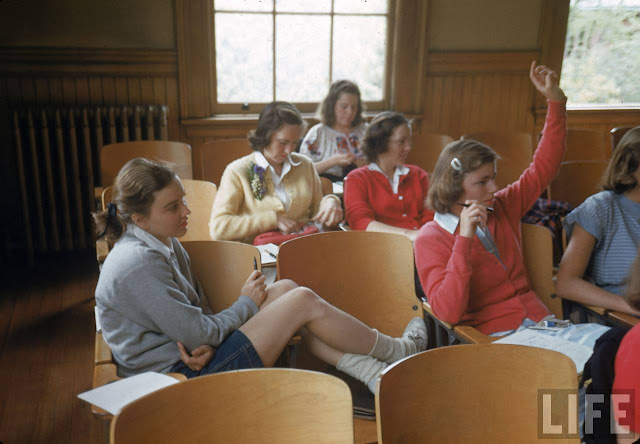 (See, when I was a naive li'l freshman, I was totally expecting my classes to look like this next one: eager, fresh-faced youth listening attentively to a wise old intellectual in ornate historic buildings... talk about disappointing, haha! Look at them, they're having tea. So jealous...) 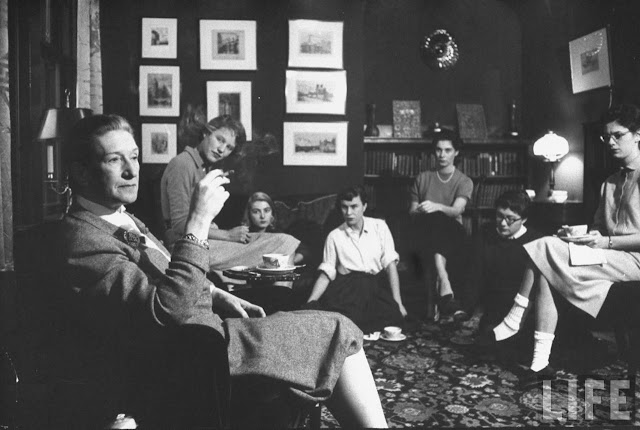 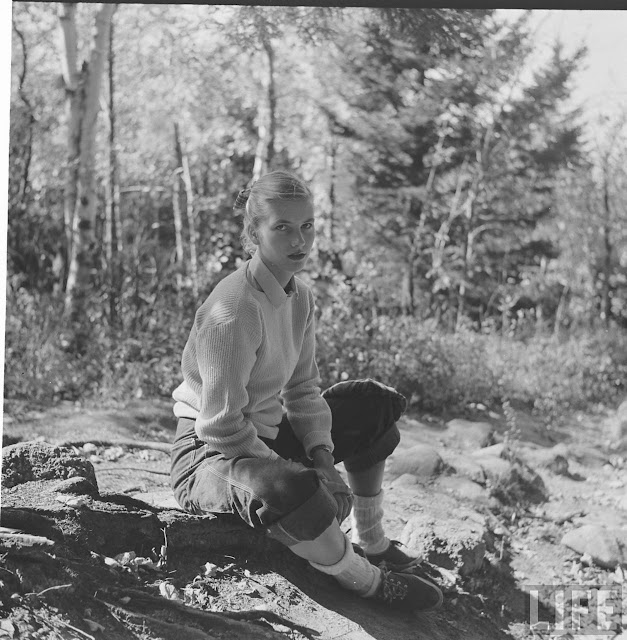 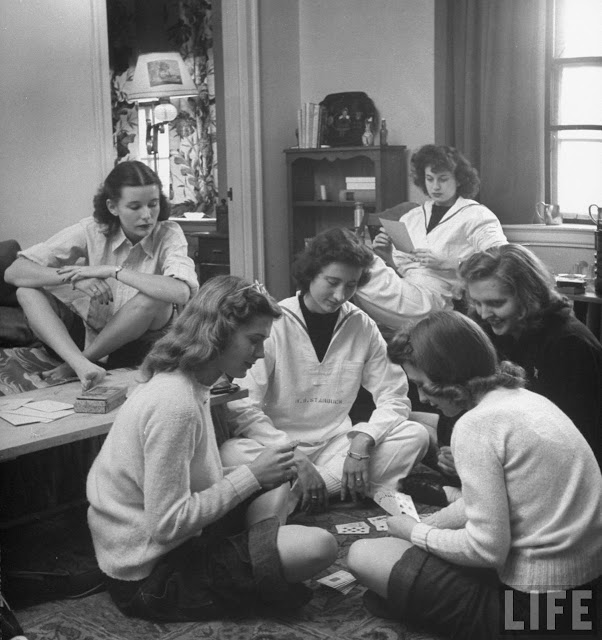 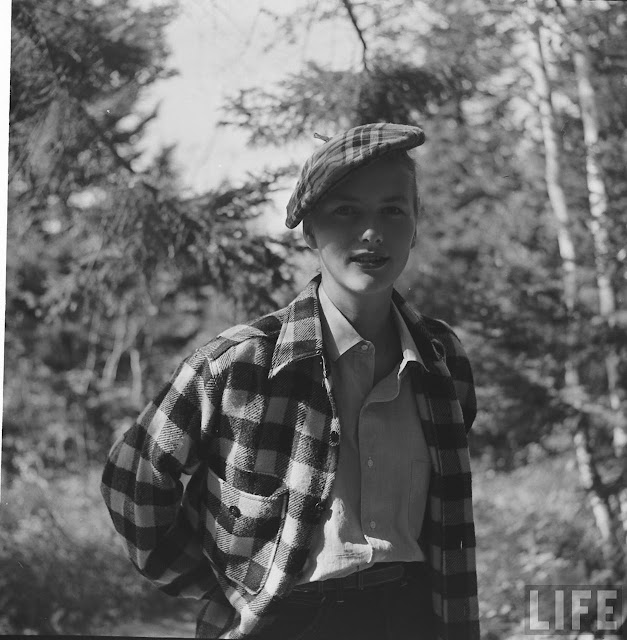 Note the girl in the backwards cardigan! 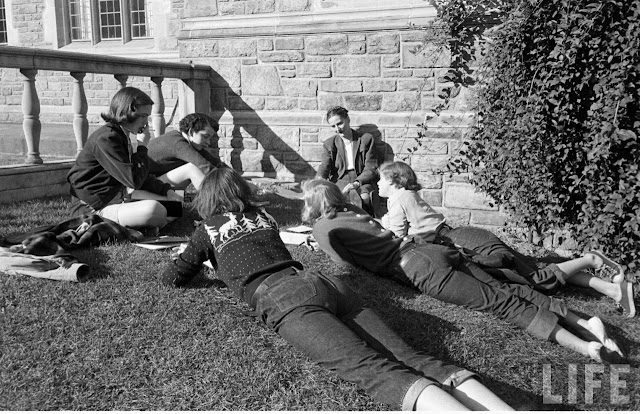 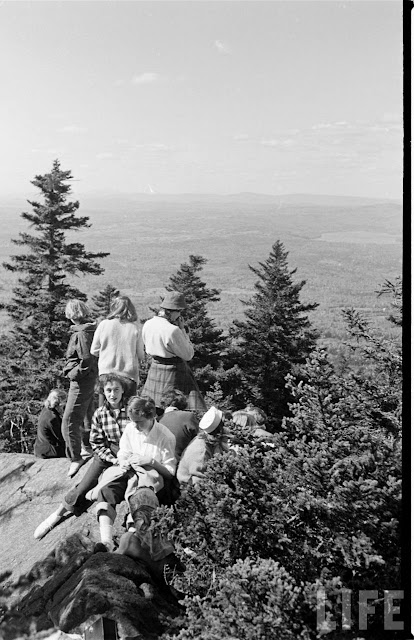 I could stare at this one for hours; so many glorious details! 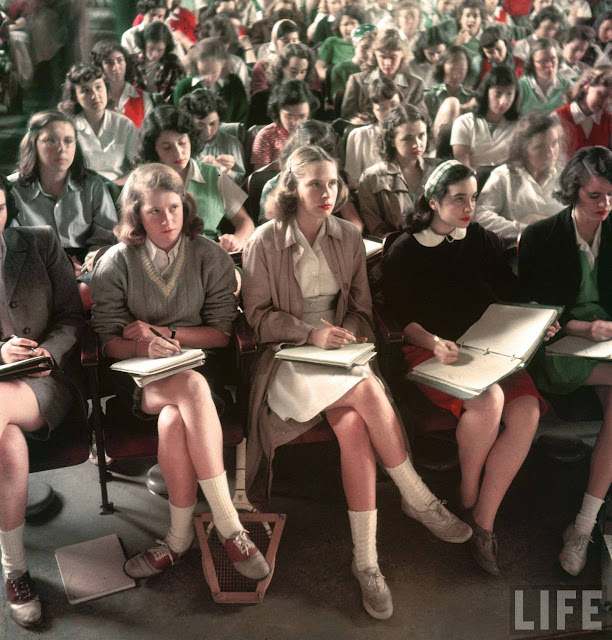 These covers from the Girl Scouts official magazine are equally swell for sportswear and collegiate looks; see more here. 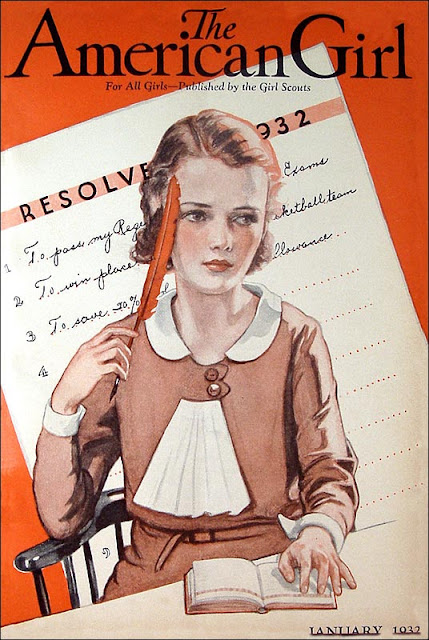 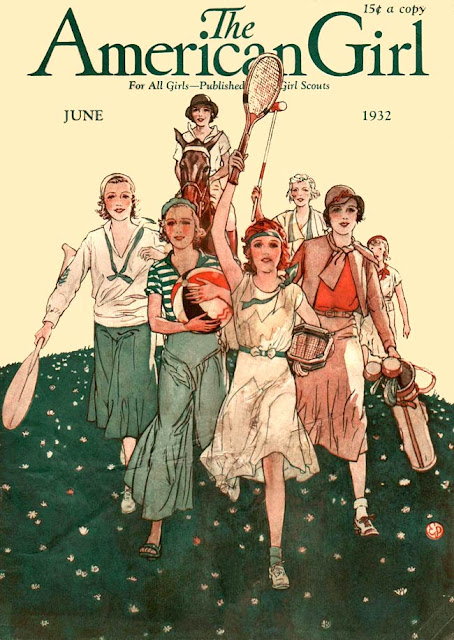 Finally, here's a little tune to shake off the mid-week blues. I can't stop listening to it, I've been humming it for days now! (much to the annoyance of all around me, I'm sure ;)

nothing ever happens here 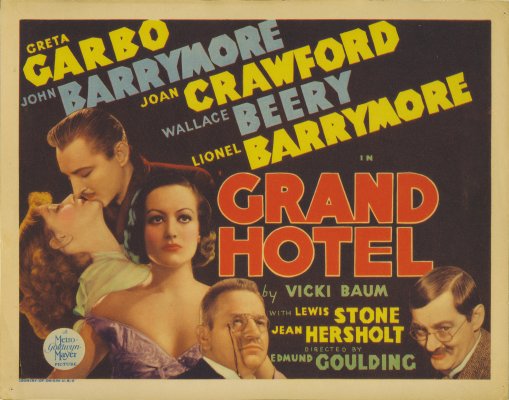 This week I had the treat of finally watching Grand Hotel, a rather delightful film, made all the more so by the presence of Crawford and Garbo. This is the classic film where Greta just vants to be alone. It's very stylish and dramatic, in true Old Hollywood form, with a star-studded cast and lavish set. I recommend it heartily for a little Golden Era glamour and escapism.
However, the DVD extras had even more fun in store... this bizarre, fabulous 1933 musical parody of the film was the highlight of the evening, I must confess. I know I must seem crazy, but it actually had me in stitches. "Garbo"'s giant loafers! "Joan"'s bold wink! Way better than the original film itself, I daresay ;)
It takes a good-natured swipe at the fluffy Busby Berkley musicals, too, with cute chorus girls in cuter costumes bursting into synchronized hoofing at the most random moments.
(Love how the onlookers barely bat an eye, particularly in the kitchen scene, haha!)
Now, I've a burning question to ask of my fellow classic cinema buffs! Was this parody thing commonly done?! I tried to find some information about it online to no avail; let me know if you know of any other '30s (or thereabouts) spoof films like this one, 'cause I think they're ever so nice!
If you've not seen the film, I suppose the above short won't make too much sense (but watch it anyway for the musical numbers!), so here are some pictures of Greta G. and my beloved Joan Crawford looking elegantly angsty as a "disillusioned ballerina and scheming stenographer", respectively. 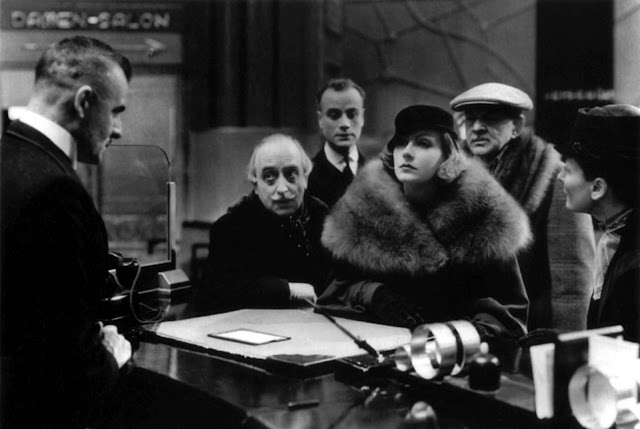 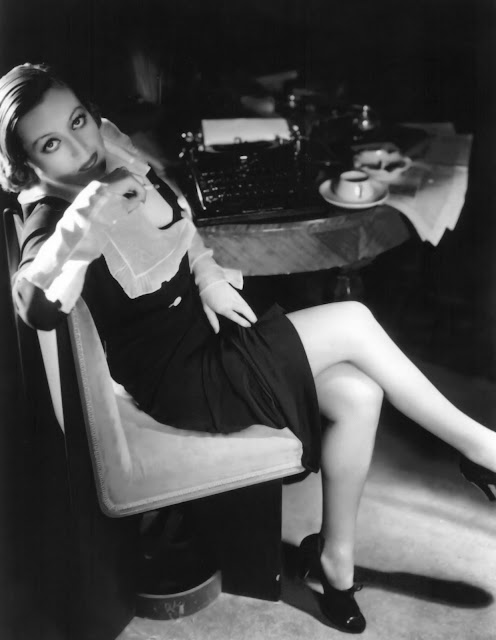 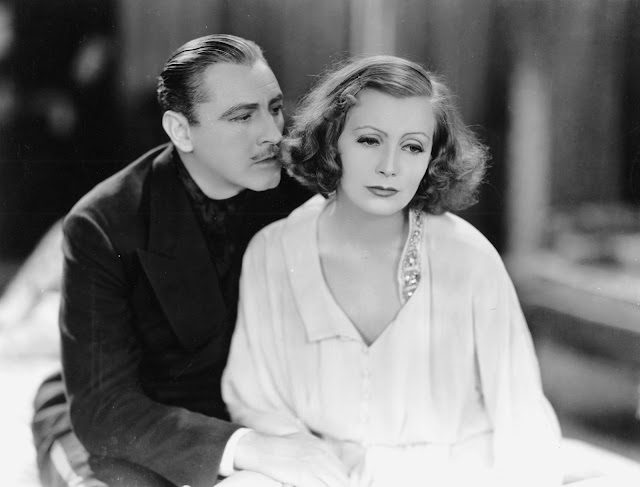 And some trivia gleaned from this site:
Joan and Greta Garbo aren't seen together in the same frame as a purposeful plan in order to avoid one actress from upstaging the other. Greta Garbo insisted on top billing which infuriated Joan to the point of exacting a little revenge of her own during production. Knowing that Greta Garbo hated tardiness and Marlene Dietrich on an equal level, Joan made it a habit of arriving late on set, and in between scenes, she would play Marlene Dietrich records - loudly!
Oh, that Lucy LeSueur, such a kidder. This makes me love her even more than I already did!
Well, here's to a lovely weekend, my dears!
♥♥♥
by Dakota at 8:00 AM 6 comments:

dress of my dreams

My 1910s daydreams came true... this little darling found its way to my closet! 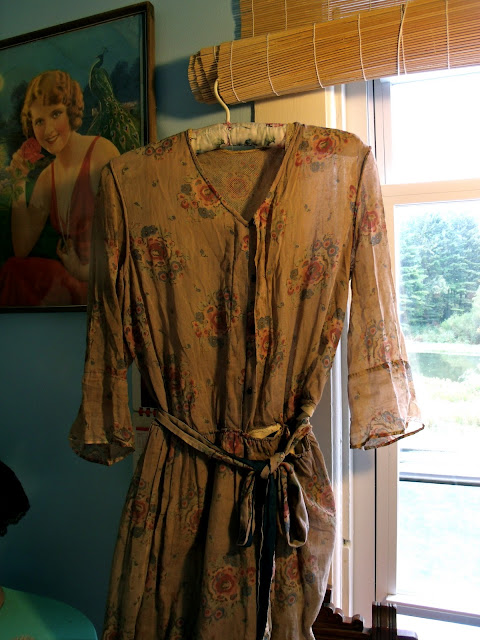 I found this lovely frock at the antique store a few weekends ago. It was marked at $30.00, which I'll admit is a steep price for me on such a frippery, but the booth was 25% off to boot, and for an Edwardian day dress that is in quite wearable condition... well, I'd have been silly to pass it up! Oh, and did I mention that it's my size exactly? It's seen better days, OK; I do believe the fabric has faded a bit over the years, as you can see around the seams, and there are some smatterings of rust spots. However, these age marks blend into the exquisite floral pattern ever so well, adding heaps to its charisma and spooky-sweet charm. Now, be a dear and humor me as I gush over all the dainty details... 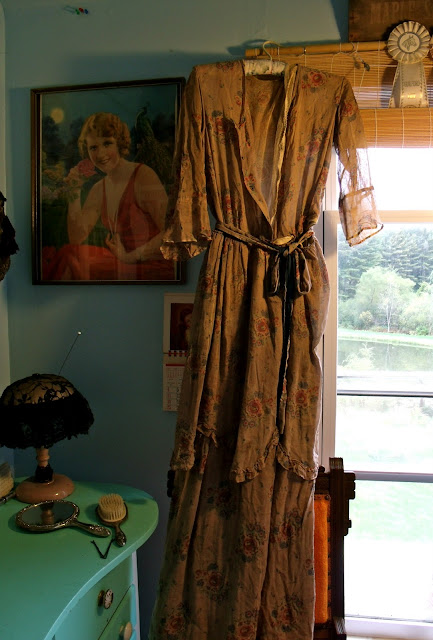 It has a built-in net camisole and silk skirt lining... I am just fascinated by the intricate construction of this dress! 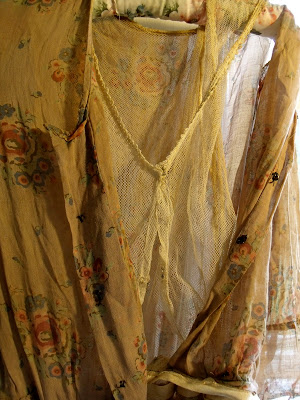 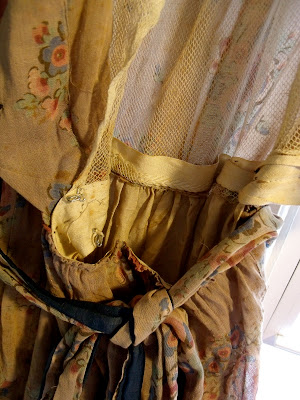 The fact it has the original belt is wonderful! 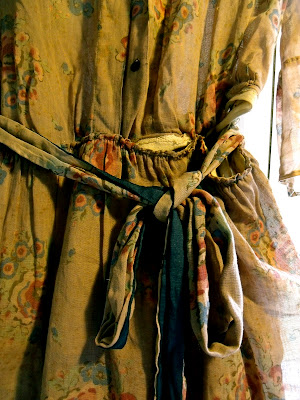 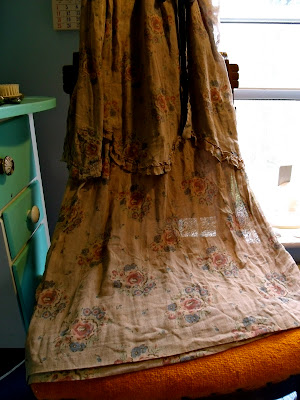 This is the best picture in terms of true color... it was a rainy day when I took these, and the indoor lamp light shed a golden glow on things. Here you see the worst of the foxing. I may try giving it a little rinse with some gentle soap sometime, but I'd hate to risk upsetting those antique dyes. I dunno, I'm rather content to live with the imperfections-- they give it an ethereal, time-worn patina, just like faded wallpaper and peeling paint in a dilapidated farmhouse. 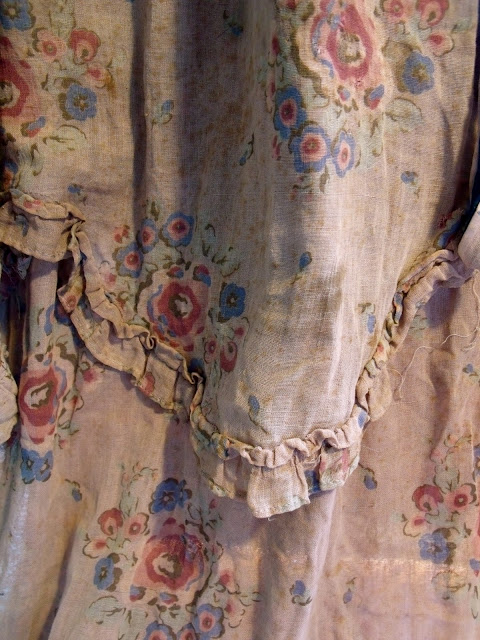 So there you have it. Sorry to flood you with all these pictures and to keep rambling on about what must seem like a filthy old rag to some of you! I'm just so elated to have finally acquired my first wearable (and brightly colored!) 1900s frock. Structurally, I am amazed at how sturdy it feels; given the fact that the only flaws seem like they come from storage issues, I wouldn't be surprised if this piece got little wear but was tucked away in someone's attic. Of course I'm not about to wear it for everyday life, as it's naturally very fragile due to being a centenarian and all, but I think it may have enough life left in it for a calm, elegant tea party or two...

Do you have any special dream-come-true finds in your closet?
Also, I am quite ignorant about the specifics of earlier fashions; might any of you know just what sort of occasion this dress would be for? Day dress, house dress, tea dress...? I'd appreciate some input!

Hello dollies! Thanks a million for all the birthday well-wishing; y'all are the sweetest!! 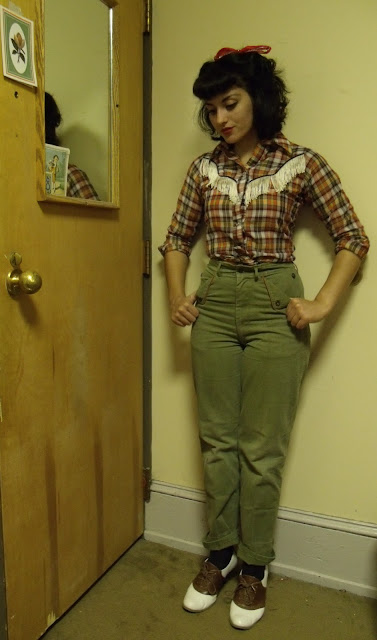 Here's a quick outfit post to share with you. I am wearing some old Boy Scout trousers and a '60s Rockmount western shirt I snagged on eBay way back in 10th grade.

I'm crazy about these new-to-me Boy Scout slacks, thrifted for $10 (I got the matching shirt, too-- it's too big but covered in nifty pins and badges). They're great rough-up pants for mundane stuff like early morning classes and late nights in the library. I guess I'm a regular ol' cross-dresser over here, 'cause my two other favorite pairs of pants (these and these) are also originally for the lads. The only inexpensive vintage womens' pants I can ever seem to find are the ubiquitous, tapered-leg '50s/'60s slacks and Jeanies, which are cute and all, but I find some great stuff in the mens' section. My figure is not especially boyish, and they actually seem to fit quite splendidly, if I may say so myself. Also, all these Boy Scout and Navy cast-offs are tough as nails. Mine have all come from antique stores and eBay thus far, but this website is gonna have me broke, I reckon... they have sailor cast-offs galore for very reasonable prices. Get yours today. 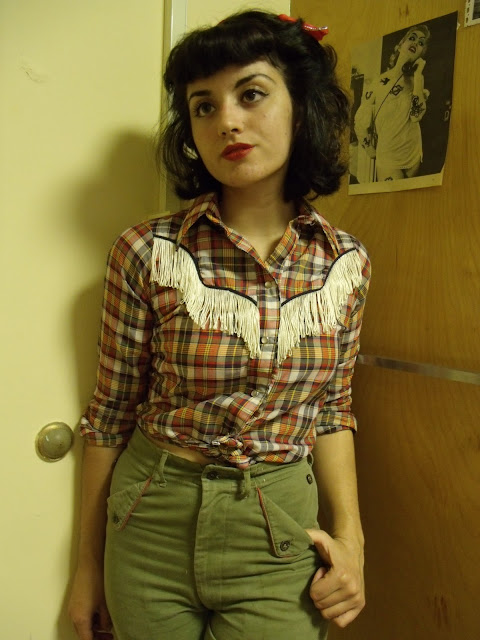 These Scout pants of mine have a nifty li'l pocket on the inner waistband. But oh-oh, what's this? "This garment may be worn only by a registered member". I actually feel a little guilty about that... 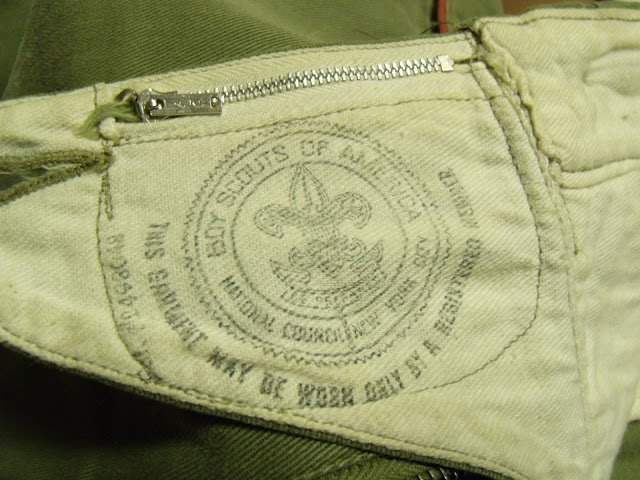 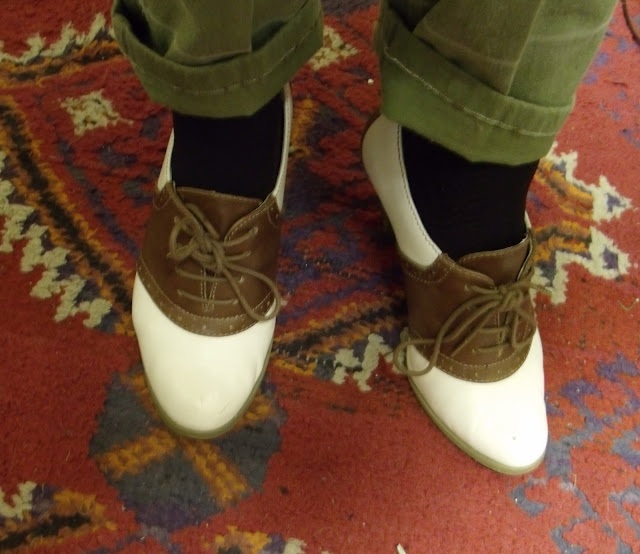 (d'you like the antique oriental carpet I lugged into my dorm room?!) 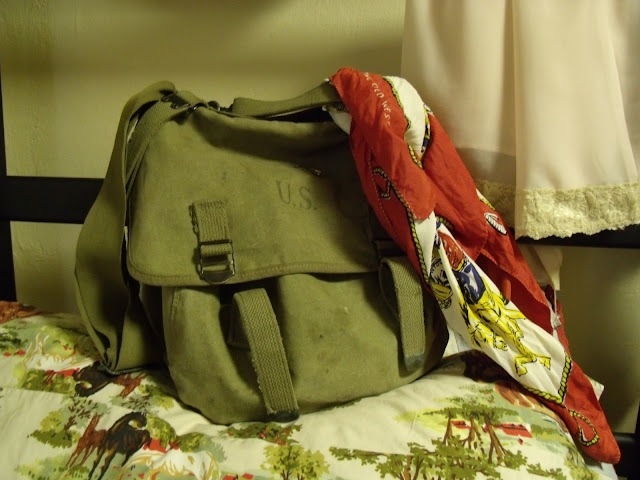 Oh yes, did you notice? My hair is back to black!! After two long years of growing it out, the siren call of raven-hued locks was just too much to resist. I feel more like myself with black hair.